I wanted to visit Josephine’s Bistro since I was first introduced to them in “Fire in the Triad: Battle Rabbit.” Days before they altered their summer menu, I managed to sneak in and try a few dishes. A cool, cozy ambiance features wooden accents, and a notable rolling pin bookshelf. I want this in my kitchen at home. The large, inviting bar in the back of the restaurant leads out to limited seating on a patio. The number of tables makes dining outside feel exclusive. Lady freebies (nail files, bobby pins, etc.) in the bathroom are most appreciated.

Any restaurant that offers wine samples gets an A+ in my book. Our well-versed and knowledgeable server offered me two “blind” samples, and it turns out, I favored the Malbec over the Merlot. Sun-dried tomato “focaccia” had more of a cornbread texture, but the flavor of the tomatoes was a perfect combination of sweet and tangy. Sun-dried tomato oil was heaven to saturate the bread with. I would bathe in this.

Mushroom Ravioli are pillows of perfection, and obviously house made. Whiskey notes are present in Makers Mark Crème Fraiche, though the chef was a bit heavy handed with the sauce – I didn’t want the little raviolis to drown. Spinach Pesto and White Truffle Oil provide an earthy complement to the sauce. The server suggested the addition of Grilled Jumbo Sea Scallops – a wise recommendation. What’s listed as an appetizer was easily made an entrée with this adjustment. 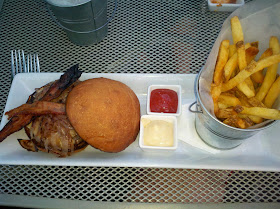 The Lamb and Beef Burger offers strong flavor, not hidden by a marinade, and is accompanied by toppings that round out the dish well. Port-braised red onion provides a nice bite of acidity, and “local country ham” is clearly identified as bacon. Bacon is always a necessary saltiness. Gruyere (my favorite cheese) brings a nutty flavor and gooiness to the dish, and the nicely toasted focaccia roll soaks up these flavors. Unfortunately, I had trouble detecting the Worcestershire Garlic Parmesan Aioli, which disappointed me since those are three of my favorite flavors. Truffle Pomme Frites are a good excuse to eat more fries. Josephine’s are thick, to the likes of Wendy’s, but I prefer a thinner, crispier fry, a la McDonald’s (and Print Works Bistro.) 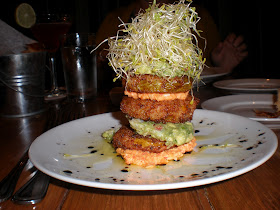 Fried Green Tomato Napoleon stacks layers of perfectly crispy green tomatoes with avocado and lump crab, alternately with Parmesan Pimento Cheese. Crazy cool presentation. The fried coating on the tomatoes didn’t taste at all greasy or soggy, and the creamy avocado and freshness of the lump crab made for a very decadent dish. Being a pimento cheese snob, I enjoyed this variation, though I didn’t pick up as many Parmesan notes as Cheddar. This is a quintessential Southern dish, with the volume turned way up. Though I didn’t really need the mound of alfalfa sprouts on top.

Josephine's offers tons of weekly specials (half-priced appetizers on Monday and free wine tastings on Thursday). I look forward to returning to check out their adventurous winter menu.

What began as a quirky romantic comedy quickly turned into “The Rashida Jones Show.” Granted, her beauty and accessibility in the character of “Celeste” was captivating, and I didn’t find myself getting bored with the story. “Celeste and Jesse Forever” tells the story of two people trying to remain friends after getting divorced. The problem lies in the fact that they’re amazing as friends, but acknowledge that it’s “weird” for them to still hang out and say “I love you.” Largely autobiographical, Rashida Jones’ co-written screenplay hits close to home for women. Still, there’s enough oddball humor for guys.

As slacker Jesse, Andy Samberg’s signature humor was present in the first 30 minutes – I’ll never look at a small tube of Vaseline or a piece of baby corn the same way again. It’s clear these two have a connection, though their witty banter clearly outweighed their sexual chemistry. The audience is totally unaware that the two are divorced until their friends call them out on being together too much. These friends (Ari Graynor and Eric Christian Olsen) didn’t provide many laughs, perhaps because the leads are the comedic stars.

Comedic relief was definitely present in the couple’s friend Skillz (Will McCormick). With a name like that, you know this dude is a riot. (McCormick co-wrote the screenplay with Jones, so of course he would make his character hilarious.) After eyeing the frozen yogurt hottie, Jesse decides she’s an incentive to get going in the dating world again. Samberg takes on a more serious role after a huge discovery that further distances the two leads.

Celeste’s boss (played by a creepy Elijah Wood) encourages her to date as well, though she rejects every qualified candidate she comes across. It’s obvious she isn’t yet ready for another relationship, so perhaps she’s just looking for something wrong with these men. Though some of them do turn out to be pervs.

The audience isn’t sure if Celeste and Jesse belong together. The plot is very similar to “The Break-Up” – we want them to work it out, we think, but her constant complaining of his immaturity and her condescending attitude toward him makes us think twice. The film does a wonderful job of exploring the dynamic between men and women. It seemed like each time they tried to end things for good, they’d end up snuggling and making out. Do we want the most what we have the least? (The answer is “yes.”)

This was an impressive first screenplay for Jones and McCormick, and a very relatable story for anyone who has tried to “stay friends” after a breakup.
Amanda at 6:05 PM No comments:
Share
‹
›
Home
View web version